Home Editor's Corner They call me the Drag Queen Whisperer 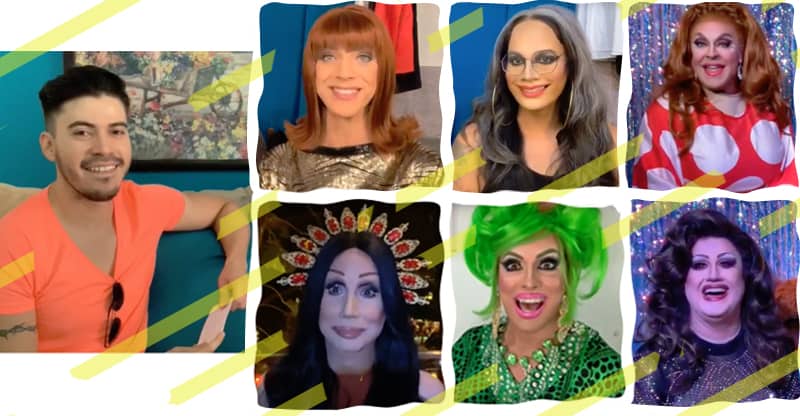 I was recently dubbed the ‘Drag Queen Whisperer‘ by someone here in Puerto Vallarta. This nickname came about from my many interviews and interactions with drag queens that perform here due to my job. I found this to be hilarious! The Drag Queen Whisperer. I’ll take that.

I’ve been in Puerto Vallarta for three months now but it feels like a lot longer! I’ve been very busy with the magazine and during my short time here I’ve been able to meet great people, get to know the community, meet incredibly talented performers that come here to entertain us, and yes, interview them as well.

I never thought I would one day be interviewing anyone on camera, let alone big household names that I have been so lucky to meet here in Puerto Vallarta. I have met personalities such as Coco Peru, Varla Jean Merman, Hedda Lettuce, Miss Conception, Paige Turner, Thirsty Burlington, Mama Tits, and Drag Race queens like Raja and Tammie Brown.

I’ve also interviewed other non-drag performers such as Branden & James, Debby Holiday, and Well-Strung, but I’ve done mostly drag queens, hence the nickname. I’m one of those gays that have watched every season of RuPaul’s Drag Race, so I think that’s where my fascination with these type of performers comes from. As you may have guessed, I was gagged when I first met Tammie Brown and Raja. Gagged.

Puerto Vallarta is so lucky to have amazing performers come year after year, and I’m not just talking about drag performers, of course. When I was living back in Guadalajara, I had no idea that there was such a rich bunch of entertainers in this little Mexican beach town. I mean, multiple Billboard charting singer/songwriter Debby Holiday? In PV? I was watching Queer as Folk years ago and had no idea that the one singing a couple of their songs was Debby herself. Great talent in Puerto Vallarta!

Not many Mexicans, or people around the world for that matter, know about this special community that we have here in Vallarta. I will from now on, no matter where I am in the world, be an ambassador for my country, Mexico, and specially this beach town. People have to live the Puerto Vallarta experience.

Thank you to all the great performers I have interviewed so far this season. You rock!

Check out all my interviews!

Coco Peru: the taming of the tension – INTERVIEW

Branden & James: musical duo returns to Vallarta a year after their paradise wedding