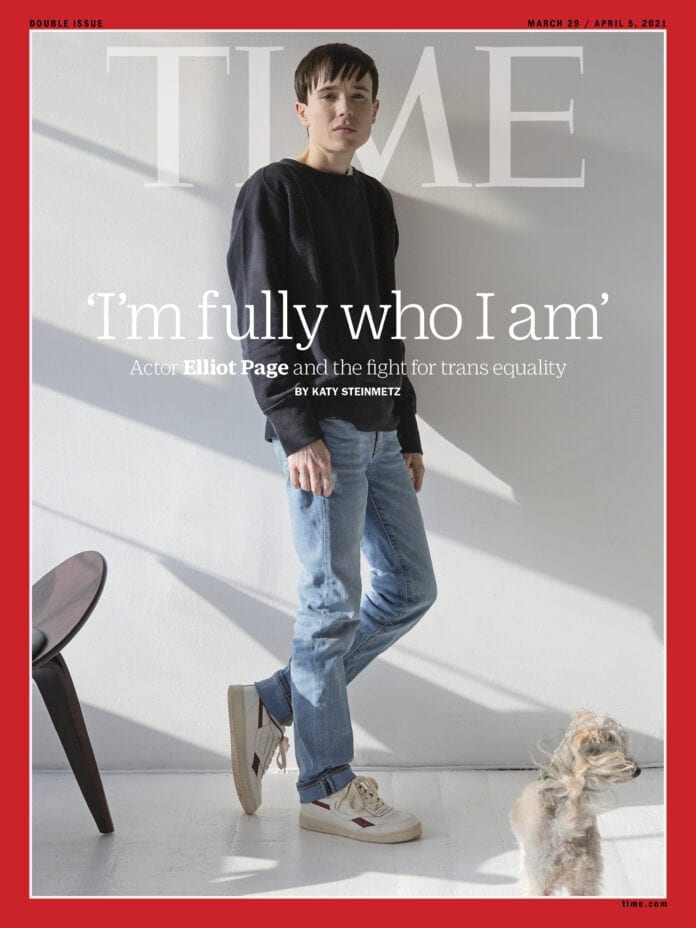 As Alex Schmider (Associate Director of transgender Representation at GLAAD) points out, Elliot Page’s  Times cover will set a precedent in the fight for for trans equality.  According to him, cultural change is a hard thing to measure accurately but important moments of visibility, such as this cover, can help raise awareness and start a conversation.

Schimer recalls Laverne cox’s 2014 Time cover as one of these pivotal moments in mainstream media history. The cover headlined “The Transgender Tipping Point” was a game changing cover and since then actress such as Cox have been nominated for awards such as Emmy’s and are now celebrated for their breakthrough roles in dramas such as “Orange Is the New Black” and “POSE”.

In the article for the Thomson Reuters Foundation, Schindler goes on to explain the importance of this new cover with a proud trans man.  This critical moment in trans visibility comes almost 7 years after Cox’s cover, but late is better than never.  “Last December, when Page disclosed to the world that he’s transgender, the culture noticeably shifted and, for many people, including myself as a trans man, it made a profound impact.” commented Schimer.

Being an Oscar nominated actor with credits in movies such as the “X-men” franchise, “Inception” and “Juno”, Page is the most recognizable trans-masculine person in current, possibly all of, history. Becoming public about who he is and his true identity will give young trans boys, men and non-binary people a public and well known model; someone they can feel identified to.

The author goes on to express how he grew up in a world where he felt no public figures of trans men existed, that other men like him were out there.  No film or television characters that he, or so many others, could relate to and with no social media, finding community to connect with seemed almost impossible.

Alex refers to the “flawed visibility” that most trans women have received in the past.  Trans women have been “hyper-visible” in the media but largely in a negative and exploitative manner.  This visibility comes at a negative cost to the trans community, where trans men are almost invisible to begin with.  When young people look to mainstream media for what their future could be like, they are usually left feeling alone and with no sense of community because of this lack of representation. In his article, Alex evokes Marian Wright Edelman’s observation about representation, “Children cannot be what they cannot see”.

As you read the comments on the Time article, it’s inspiring to see all the heartwarming messages of love, support and admiration for the famous actor. Elliot’s fame and the decision to use it to educate and affect change and political action is of transcendental importance.

“I believe we’ll look back on Elliot Page and his Time cover as another moment that will be a great inflection – a turning point in the pursuit of acceptance and full equality for transgender people.” Schimer closed.

The issue comes out as we approach March 31st, International Trans Visibility Day.