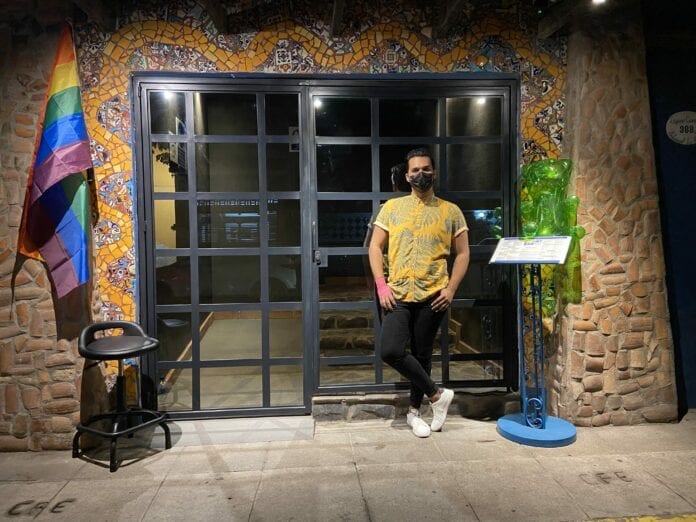 Candy Bar Restaurant, which opened its doors in Zona Romantica in January 2021, has sold and closed its doors on Sunday, May 1, 2021.

The bar/restaurant announced the closing on its Facebook page saying, “Candy Bar started out with the priest complaining and we will close today after being sold to “the real government”! It was a blast and a lot of hard work! We were treated better by the buyer then the priest! We are so thankful for everyone that believed in us and helped us! We will see you down the way! Thank you so much to my partners and employees! Better things are to come!!!”

The building Candy Bar was housed in is located at Lázaro Cárdenas 388 in the former space of La Hacienda De Carlota. A massive remodel project had transformed it into a fun and colorful area that reflects the name.

Shortly after opening, parish priest Esteban Salazar, who is over the Catholic Church across the street from Candy Bar Restaurant, tried to organize a community movement to close the bar, saying it was too close to his church – citing a local ordinance that didn’t allow a bar within 200 meters of a church – despite the fact that La Hacienda De Carlota also served alcohol and had music.  But what Salazar never spoke of in the media was the fact that the bar was exempt from the 200 meter rule, because it was located in Puerto Vallarta’s tourist zone.

The City of Puerto Vallarta had held firm that Candy Bar was within its rights and had rightly issued all proper permits.  Salazar aligned with local Spanish media to try and push his case but the bar remained open. He continued to call codes with inspectors visiting regularly, but the bar continued to stay open because it complied with all city regulations.

And according to the bar, Salazar also sent a woman over on regular occasions to eat and take pictures and try to find violations.

“People would also walk by the doorman and say the most vile discriminatory things to him. Surprisingly, most were older “Christian ladies”,” said one of the bar employees.

It appears, based on the Facebook post, that a new bar by the same owners could reopen in a different part of the city.

What will happen with the property at that location hasn’t been announced, but it is a hotspot for new developments and condo buildings.