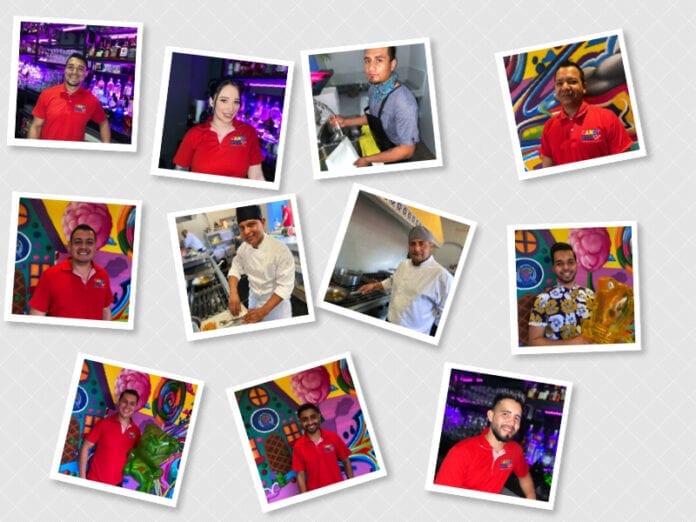 Candy Bar Restaurant, located in the Zona Romantica area at Lázaro Cárdenas 388, has hired more than 10 staff members who live and are part of the Puerto Vallarta community, and wants to take an opportunity to introduce its staff.

Tomás Beltran is the head chef. He’s originally from Acapulco but has been living in Puerto Vallarta for 15 years. On his free time, he enjoys going swimming and fishing. Tomás is married and has two girls.

Inside the kitchen, his specialties are Mexican, Asian and Italian food. His favorite dish at Candy Bar are the mixed fajitas, they include chicken, steak, and shrimp.

During his career, he has gone from being a steward to eventually working his way up to chef. There’s a lot he likes about Puerto Vallarta. From the good people that live here, to the mountains, rivers, beaches, and the notably much better safety than in Acapulco.

“Please come by and have a taste of my favorite dish, the mixed fajitas,” he said.

Jaime Curiel Curiel is also a chef, originally from Atenguillo, Jalisco. He has been living in Puerto Vallarta for 11 years. On his free time, he enjoys working out and watching movies. Jaime is married and has three children. He used to live in the USA and that is where he learned how to cook and began his career in gastronomy after starting as a dishwasher.

Inside the kitchen, his specialties are meat cuts, Asian, Italian, and Mexican. His favorite dish at Candy Bar is the Camarones al Coco, he says he likes the sweet flavor and the crunchiness.

Alexis Alfonso will be the first person you meet when you visit Candy Bar Restaurant, as he will greet you as the host/doorman. He’s from Puerto Vallarta, a true Pata Salada! He enjoys dancing and choreography and putting on a show. Alexis is a very social person, relaxed, and very talkative.

Omar Vallejo is one of the bartenders and is from Puerto Vallarta. Whenever Omar is not working, he’s taking his dogs out for a walk, working out, or sleeping. He’s charismatic, social and all smiles.

Maximiliano Reynoso is one of our bartenders. Originally from Culiacan, he has been living in Puerto Vallarta for two years. He enjoys swimming and looks forward to making one of his specialty drinks.

Carlos Villavazo is a waiter and a native Puerto Vallarta. Carlos enjoys playing music, mainly the drums, but also likes to play the guitar.

Cristian Salgado – is a waiter and a Puerto Vallarta native. Cristian enjoys going to the beach, taking walks, and dancing to all sorts of music like hip pop, cumbia, and salsa.

Tonalli Tamez Flores is the cashier and happy to lend a hand wherever she is needed. She was born in Guadalajara but has been living in Puerto Vallarta for three years. Tonalli is also a seamstress and she went to beauty school.

Victor Sanchez aka DJ Nucks Selecta H – DJ Nucks is from Guadalajara but has been living in Puerto Vallarta for four years. In addition to playing music, he enjoys playing chess, volleyball, and when he gets a chance he goes to the beach. Victor loves candy and actually got his Dj name from a brand of chocolates.

José Andres – works at the restaurant’s dishwasher. He’s originally from Chiapas but has been in Puerto Vallarta for nine years. He spends his free time with his family.

Victor Manuel Garcia is a server in the restaurant and has been in Puerto Vallarta for six months. The beach and many outdoor activities lured him here from Guadalajara, because he is an avid outdoors person and loves cycling, the beach, and soccer. He loves working with his fellow co-workers at Candy Bar Restaurant.

For more about Candy Bar Restaurant, visit their website www.candybarpv.com. You can also find them on Facebook as Candy Bar. If you want to check out their menu, you can find it here.