But the director at SETAC is confident the location is perfectly situated. In fact, according to Paco Arjona, there are two gay hubs in Vallarta.

“Really the community that we need to serve lives over here,” he said, regarding the organization’s location in Colonia Versalles. “We discovered that they don’t always have 7 and 50 pesos to go there and 7-50 to go back. It was about a half hour to get there from Pitillal and now—”

The two estimate that the organization utilizes upwards of 70% of its resources on locals and most of them are located outside Colonia Emiliano Zapata. The previous location, they agree, was a little too high profile.

“We were in a good location,” said Paco, “but we were around taco stands, bus drivers—”

“Especially for the transgender girls, you know?” said Paco, “Wearing a mustache and the next day, makeup. Everybody was looking at them. And at one point [the people looking] knew we were there for HIV care, you know, stigma and things around, so people don’t feel comfortable to go. That’s when we decided to separate from that area. And really, in the end, the people that we want to serve, they don’t live over there.”

The services are quite impressive, and growing. As with any HIV/AIDS service organization, SETAC offers HIV testing and makes condoms available at community events and relevant establishments. In addition, they work with pregnant women who have HIV to ensure their babies are born free of the infection. With the additional space and resources at the current location, they will employ a doctor who can work with and monitor testosterone and estrogen needs among the gay and trans community here.

“Before we sat down, you saw I was [in conversation] with a doctor,” said Paco. “He’s coming to help us to do hormones for transgender and to check steroids with the strippers. That’s another thing that, over there, nobody cares about that. These boys, the kids at the stripper clubs, they use steroids without any prescription, but they just want a job. They just want to get money and they do whatever they need. So we need to have someone to control it.”

“If you walk up any street,” said Ed, “you see all the pharmacies and they advertise anabolic steroids.”

“So those things, nobody pays attention,” said Paco. “And also with the doctor that we’re trying to bring for PrEP, a lot of the waiters, you know, that work, they don’t have any social security, nothing, so we want to have a doctor where they can have a file for whenever they need any care, they can come here.”

SETAC will be one of the pilot cities for a United Nations project that will provide PrEP, beginning in early 2018. According to Ed, the announcement has brought renewed interest in their services from American and Canadian residents of Vallarta.

“Before they didn’t feel any connection,” said Paco, “because, yeah we provide condoms, but they buy their own condoms. We do HIV tests, they do their own tests. They don’t care. We take care of babies, they don’t have babies, so we had no connection but now with PrEP more people want to use [our services].”

If it’s not already clear, the two see a wide open divide between the two gay identified communities in this city. There is very little overlap.

“My idea is to cater to the Mexican community first,” said Ed. “Paco’s is not. Paco believes we treat everybody equally. And, you know, I believe in that, but the Mexicans appreciate us and the Americans don’t.”

“A Mexican will come here,” he said, “and we don’t expect them to leave a donation, they don’t have it, and that was another one of our decisions in coming here. A lot of the Mexicans that we want to reach live out here and a lot of the Mexican kids that live here, gay kids, they don’t go there [to Colonia Emiliano Zapata] because they’re not welcome and they feel inferior and they’re put down. And they don’t have seven and a half pesos to get over there on a bus and seven and a half pesos to get back. So we needed to come to them.”

“—and then end up sleeping in the park,” said Ed.

“So they have all their fun over here. All their events where they live, you know? It’s a different community, where the whole family joins—”

“—and the grands and it’s a big, different crowd over here.”

“We cover those events,” said Ed, “with information and condoms and all that, so we’re a part of that, but if you go down there, to Little America, and you say, oh man, I had a great time last night at Miss Pitillal! they’ll say, well, what’s that?”

“They have no idea.”

It speaks to the original intention of the organization, that it could be both an HIV service organization as well as an LGBT community center.

“You know, we’re started off as a gay community center,” said Ed. “And after a couple years we were realizing, first of all, the gay community center aspect didn’t pan out the way we wanted it to. Paco was running another AIDS organization in town, the only other one in town, and I opened this up and it was intended to get the kids out of the park and off drugs and stuff, and so I figured a community center like up in the U.S. was a good idea.”

“Then Paco’s organization was folding. He had the HIV and the AIDS background, so I figured we’d have one part of the community center would be with HIV and AIDS. Well, eventually the HIV and AIDS took it all over.”

And the organization expanded to meet the changing needs of the community. Since its founding in 2009, SETAC has discovered the HIV community includes more than gay men.

“One day I went in and realized that, because of where we were and the sign we had outside and we had a gay flag, it was keeping the people that needed us out, because they wouldn’t walk in because of the stigma of the flag,” said Ed. “And within several months after we took that flag down, we had our first pregnant woman who had HIV, and she never would’ve come in if that flag was up there. And now, from that we have a program for pregnant women who have HIV and we’ve had 26 babies born HIV-free. So we had to evolve also, you know?”

The pair form the perfect example of contrasts. Paco is soft-spoken and amiable, born and raised in Mexico and speaks with a strong Spanish accent. Ed is more outspoken, an American with a thick Boston accent, even after years of living in Mexico. Yet both are unrelentingly community-focused.

They met in 1996 here in Vallarta, both were on vacation.

“Sure!” said Paco, and the two shared a laugh. “It was Halloween, October 31st, in Paco Paco when we met.”

Ed had a heart attack in 1998 and the two moved to Boston, where Paco found work at the department of public health. “It was the HIV drug assistance program,” he said. “They hired me to do different things in Spanish and finally I became in charge of client services and pharmacy relations for people speaking Spanish. Then I went to school to learn more about this, and English too! Then I came back looking for a job in Puerto Vallarta because as a Mexican I wanted to be close to my family.”

“They hired me as a director of the organization for HIV that was here,” he added. “It was Vallarta Enfrenta el SIDA, Vallarta Confront AIDS. It was run by the owner of Hotel Mercurio, Paul Crist. We came back in 2007. And 2009 is when [Ed] founded this.”

“I got real sick” said Ed. “By then I had already had two heart attacks. I went back up to Boston because I couldn’t even walk. And I got diagnosed and they gave me six months to live. So I came back here and opened up the center. And it’s kept me alive ever since. Of course, I’ve had another heart attack in the meantime.” 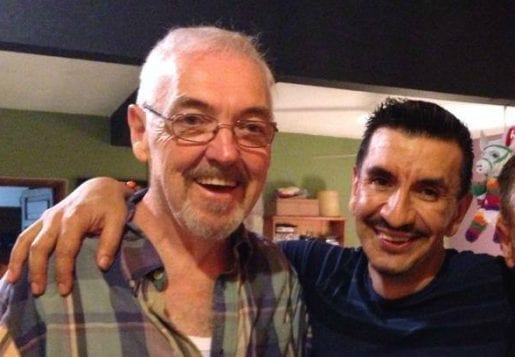 LGBTQ Vallarta Collective to March as Part of International Day Against...