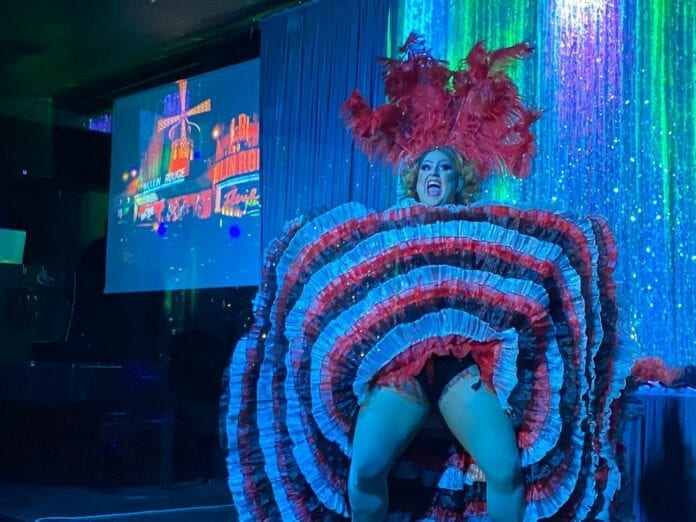 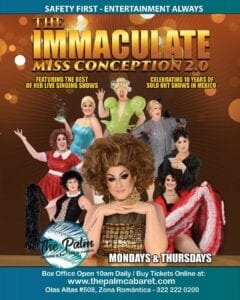 Kevin Levesque as Miss Conception has been delighting audiences around the world with his unique style of female illusion. She is a Female Delusionist®. This year not only celebrates her tenth season in Puerto Vallarta but her twentieth year in the world of drag. That represents a ton of makeup and gowns.
From her beginnings in Toronto to touring and amusing [and maybe shocking!] patrons all over the place she has impressed listeners with her live singing and wowed the gathered multitude with stunning costumes, some of which are changed before your eyes on stage with the appropriate wig chosen from her vast collection. There is only one Miss Conception and she is most loved. She is once again ably assisted by Max Castillo who checks her outfits and clears the stage. 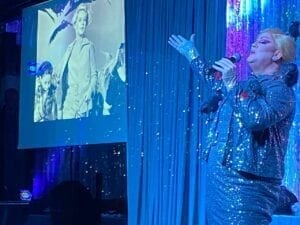 Miss Conception decided to offer a tour of her past seasons’ shows. The video screens showed notable clips and posters from these themes as Goes to the Movies, Where in the World, TV Land, Villains and her and many people’s favorite Disney. Not knowing if she realized at its initial design, but she took many in the audience on a trip down Memory Lane. One image after another brought back remembrances of being in her presence enjoying a particular themed show, character and song.
A takeoff on “Monster Mash” opened the evening and had us moving oddly to the beat. Mash became Mask and all were urged to wear one to protect everyone in this pandemic always. Time to play and off she went with “Boogie Shoes” while sporting roller skates for a time. But Max removed them before she rocked over and brought a bone. 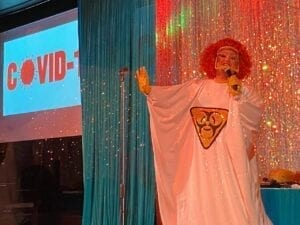 Miss Conception could not contain her joy of being in front of live moving people after months of virtual streaming. She did admit the slight movement of the shoulders then was a far cry from her shenanigans of dancing and flipping all across the stage. She loved singing in front of her ‘aquarium’ as she called it.
“Blackbird” started off her portrayal of “The Birds” from her movies show. She flowed from ‘bird’ song to another ending with “Rockin’ Robin”. Miss C declared that thoughts enter her mind and song/theme ideas meld together forming another funny show. It is difficult to create year after year and attain such terrific success. That is called Talent.
Another of her successful season’s shows, TV Shows, brought out the hilarious, dear Karen from “Will and Grace”. Dizzy and wildly, she proudly sang of her favorite “Money, Money, Money”. Remembering her season of Where in the World traveling, she landed across the Big Pond in England where she was the Queen of England singing, what else, “Dancing Queen”. At 94, that dame can kick her heels.
Miss Conception travels internationally on her own tours and opening act for many top performers. Puerto Vallarta remains one of her top favorites and she adores the people and The Palm. This is her tenth season here and will bedazzle you with ten costume changes! Many of these stunning ever-changing attires were created and sewn locally. One lays on top of the other unnoticed until the top one is stripped away.
Miss C. remarked that of all her seasons, she loved best the Disney exploration. She would have loved to be Little Orphan Annie except for the being poor part. She reveled in Disney’s “Annie” with a medley including “It’s a Hard-Knock Life” reaching the zenith with “Tomorrow” and holding the last note for an eternity. Off she traveled to a life of Parisian cabaret at “Moulin Rouge” loving those Diamonds and bouncing to a ‘can can’ complete with bright red feathers in typical fan shapes. Miss Conception wore a fitting burlesque corset dress with underlying full bands of bright colors. The masterpiece must be seen to believed when the undergarments are displayed to the viewers.
Be aware that no character in the media is safe from her sharp eyeballs and the critiques can be a mix of joy and surprise. Her nightly extravaganza features parodies marked by moving from one image to another always appearing to the audience in synch with the well-known ‘person’. Each character is her own undeniable image.
Miss Conception ruefully saw that the minutes had expired and wished to sing her last song spreading love to all around her. “Seasons of Love” from Glee: “Share love, give love, spread love. Measure your life in love.” Spirits were uplifted and glowing as the audience exited the venue knowing that they would return soon for one of the many fine shows being presented here.
http://www.missconception.ca
Related:
Share
Facebook
Twitter
WhatsApp
Linkedin
Email
Pinterest
Previous articleCouple Urges Caution After Puerto Vallarta Grindr Incident
Next articleACT II Expands and Adds Outdoor Theater