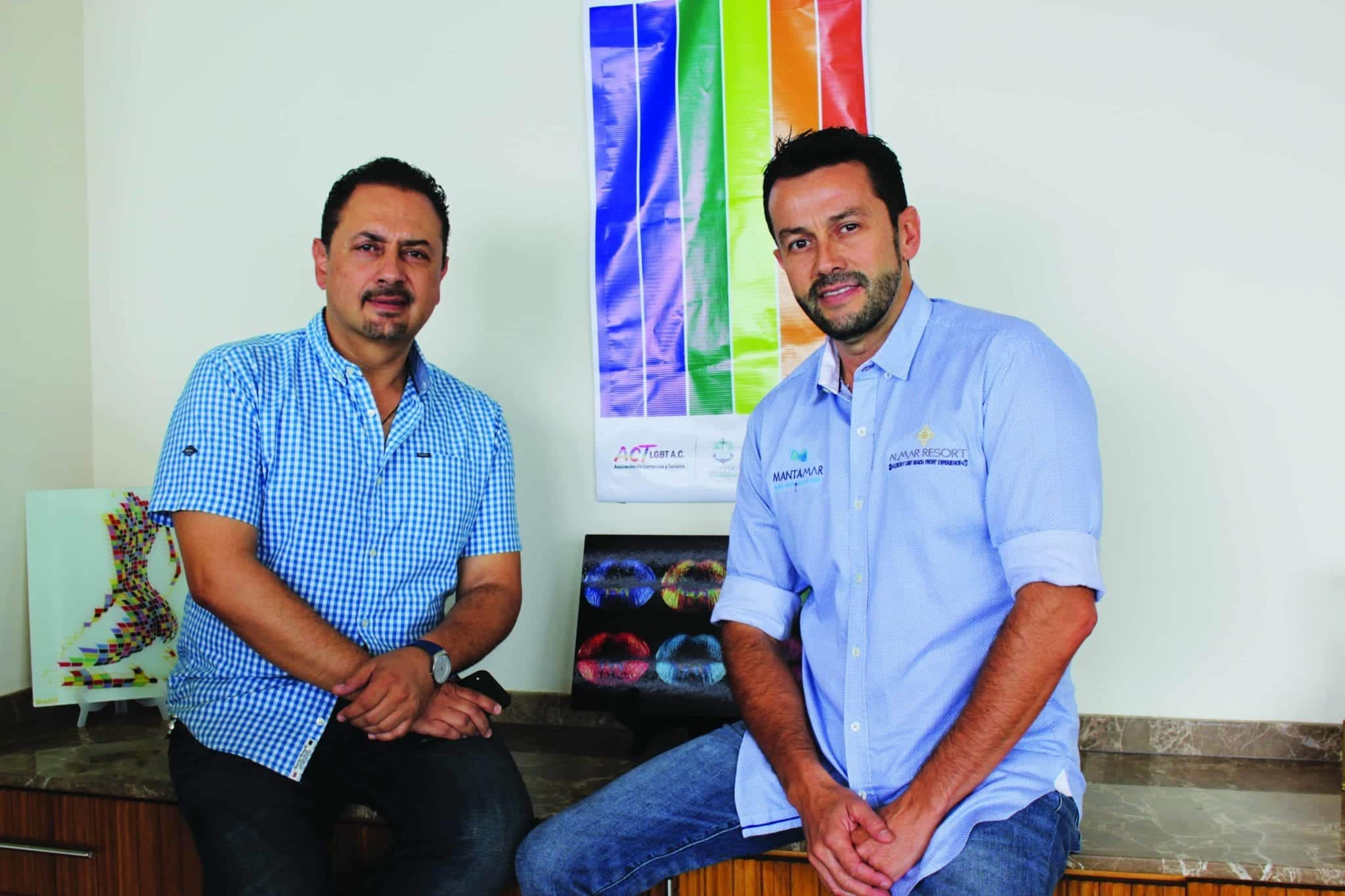 Could you tell us about how you became involved with ACT LGBT and Vallarta Pride?

VM: I am Vidal Meza. I’m 44 years old and a native of Puerto Vallarta. I’m the one responsible at Almar Group for everything marketing related. I’m also the president of ACT, and that organization sponsors the Vallarta Pride festival each year. Why did we make this decision? I had participated in Pride as a sponsor of the LGBT Community since I started here at Almar three years ago, and since the very beginning I’ve been involved with Pride.

Last year with our sponsorship, we had some differences with the organizers, and that’s when several of the business leaders who sponsor a big portion of Pride, decided to act independently from the Pride organizers. The comments that we received from participants of last year’s Pride were that it was marvelous, great and much better than in previous years, and that was basically due to the sponsorship of Javier Jimenez and the Almar Group.

After last year’s Pride and once we heard that the leaders resigned the day after Pride was over, I chatted with Javier and told him that since we’re the biggest sponsors of the event, it would make sense for us to take on the reigns of ACT. I told him that he should be the president and that I would help him any way I could. That was how we left it. Then, to my surprise, while I was on vacation I started receiving congratulations on my new position as president!

I later told him that that wasn’t what we had agreed upon. But anyhow, things happen for a reason. Now I’m happy to have been chosen as president, and why? Well, because I’m a Vallarta native, my family is from here, we have a Vallartense company. I think that this has helped ACT become better recognized by the local authorities because we speak Spanish. The language barrier between the old leadership and the local authorities had been an issue previously. With the new leadership committee, everyone is a business person, and that has opened doors with the local government.

JJ: I am Javier Jimenez. I’m 50 years old and have lived here in Vallarta full time since 1999. I’m an entrepreneur and I represent the Garbo Group and the several establishments that I’ve had the opportunity to open here in town. Since the beginning they’ve always been bars focused on the LGBT community, and that’s part of what motivated me so much to become part of the leadership committee of ACT, which I’m now a member of along with Vidal, for the same reasons that he just mentioned. I think it was the best thing at the time that we took over the reins of ACT and Vallarta Pride.

We have short-term plans to benefit the entire community, because from the time they arrive at the airport, from the first taxi they take, from the first restaurant or gay business, they start to have an economic benefit that few business owners are betting on or taking into consideration. Bringing in more people in general is a benefit that everyone recognizes. So of course, we invite new community business owners to join, to participate, to become members, because to maintain an association like the one we have isn’t cheap and opens serious new economic possibilities.

Now we are focusing on the South American market to not be so dependent on Canada and the U.S. The Europeans will come, but because of the distance, it is easier for the Latin Americans to get here. Now we are promoting Vallarta to this new market so that this event grows, the community grows, and so does the economic benefit.

VM: Something we’re looking for as ACT, as Javier says, is to bring greater economic benefit to the community, such that, no matter which hotel they’re staying in or which bar they’re patronizing, we want more visitors for Vallarta. Javier and I have already been working together doing promotional tours in the U.S. We are the main sponsors of the Palm Springs White Party along with Jeffrey Sanker and Javier has personally accompanied me to several other Pride festivals. We go to promote our businesses, of course, but we’re also promoting the Vallarta brand. We always promote Vallarta events, whether it’s Vallarta Pride or Thanksgiving. Our focus is that there are always more visitors to Vallarta and that they’re leaving benefits for our community, and that is what we’re looking for.

The emphasis this year is to make it bigger and more attractive. Today we hosted four bloggers who in total have 8.5 million followers and we brought them here to get to know Vallarta. Obviously, they’re staying in our establishments and visiting our businesses, but the whole intention is that they fall in love with Vallarta and post stories of their experiences here.

These bloggers, as Javier said, are focused on Latin Americans. They’re not so focused on the Americans or Canadians, because we feel that we’re already recognized in those markets, and we’re continuing other promotions there. We’re going to Palm Springs as Vallarta Pride and also to the World Pride festival in New York later this year, and all this at our own expense.

As Javier said, we need the support of more business owners in the Zona Romántica and others outside the Zona who have significant community businesses. We invite them to get memberships and participate in the parade, because without these resources, we can’t continue to survive.

What has been your involvement in SETAC, Vallarta’s LGBT Community Wellness Center?

JJ: Something that motivates us as business owners is the fact that, just as there is a great economic benefit from attracting international tourists, there comes with that influx, like in any other international city, problems related to health. This motivates us as business owners to support institutions like SETAC because you can get your health tests, obtain medicines, get medical and/or psychological checkups related to all kinds of sexually transmitted or other illnesses. And sometimes the public institutions don’t always help with medicines for sick patients. It was these types of issues that made us want to support SETAC with its mission. It is a project that other people started many years ago, but Vidal and I appreciate the opportunity to help. We invite other members of the community to check out SETAC. It needs a lot of medicine and staff. And their procedures are expensive and cost a lot of money. In this way we are also supporting the community.

VM: I think that Javier like myself, before becoming members of ACT LGBT, we both directly supported SETAC’s mission, and I see the situation like this: ACT is an LGBT business and tourism association that has no social function. Its mission is simply to bring more business to Vallarta. SETAC acts as our community’s social arm, where we work together with other business owners to benefit all community members. It’s worth noting that both the Garbo Group and Almar Group have been paying the rent for SETAC’s office, now for more than a year.

We have, along with ACT LGBT, brought together certain fundraising events to support SETAC. As well, if I’m not mistaken, I was one of the first people to fly donated PrEP medicine from San Diego to here. Through various contacts at the hotel—the members and guests knew doctors in San Diego who were going to Palm Springs and who donated the medicine. So, I was flying with a note from SETAC announcing that these weren’t narcotics and they were to benefit the community, in case I was stopped either in customs or immigration. I made many trips and wound up bringing down 30-35 boxes of medicine for SETAC.

Now, by grace and all the work by Paco and Ed, they now have access through international support to this medicine. Anyway, we continue to economically support SETAC and we plan to continue to do so because I think it’s an extremely important organization for Vallarta.

For those interested in more information about ACT-LGBT or Vallarta Pride, please contact Enyerber Rafaél Severin: admin@actlgbt.org; Phone: 322-342-0862 and 322-245-0600

Interview and photo by Robert Schley

Fun in the Sun awaits LGBTQ travelers in Puerto Vallarta