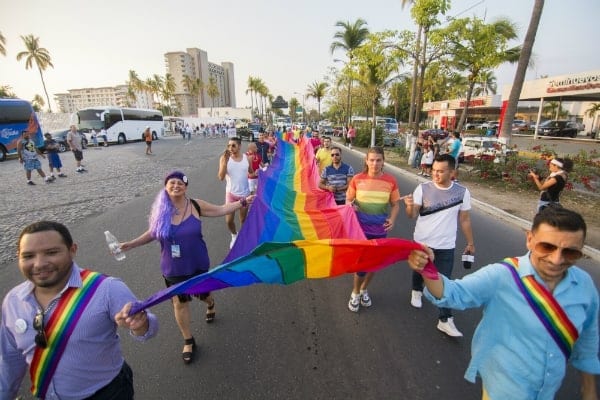 Armando Sanchez is proud to note that the very first Vallarta Pride celebration was conceived and produced in just three months.

Sanchez is currently the President of ACT LGBT, la Asociación Civil de Comercio y Turismo LGBT. It is the organization that oversees the volunteer efforts of the Vallarta Pride committee. According to Armando, the community-based effort that produced the first Pride ran into a roadblock the following year as it attempted to develop bonds with government and potential funding agencies. It is for that reason that ACT LGBT was created.

The leadership of the organization, an association of LGBT-owned and LGBT-friendly businesses, believes that the formation of an official coordinated body that includes a robust number of members will open doors at government easier than if one individual or business attempted to do the same thing. Sanchez, who outside the ACT LGBT sphere is an owner of Palmera Vacations, is quick to point out that membership has privileges as well.

“The association hosts monthly events where we present products or services that will benefit the business community,” he said. “And every month we also host a social mixer for networking for business owners to interact and share business information. And we have monthly meetings regarding the ACT LGBT orientation, what are we doing, where are we going, where are we moving to, so that we’re all on the same page on what the association is and what we are working on for the community.”

Pride is its own unique beast inside ACT LGBT but, as evidenced by its formation, it wasn’t always that way. “In 2015 I was president of Pride,” he said, “so I was in charge of the whole festival. I was on the ACT committee and I was in charge of the Vallarta Pride committee. It was a lot of work. We pulled it off and it was great. But that’s when I said there needs to be two: the ACT association to focus on its projects, and pride committee only on pride because it’s getting so big.”

Vallarta Pride, as an organization, shouldn’t be confused with the Pride events that are familiar from cities across the U.S. and Canada. Here in PV, Vallarta Pride does not present every event associated with the weeklong festival. “Pride the brand is an umbrella where we focus on promotion,” he said, “and international promotion and national promotion is not cheap. We try to work with all the different organizers, the film festival, the parties, the health fair, the public events. What we produce as Vallarta Pride is the parade and this year we’re presenting a farmer’s market that will be in the evening at Lazaro Cardenas park.”

With that degree of decentralization it appears the organization struggles to underscore its value across a community of businesses that ordinarily find themselves competitors for a tourist (and local) peso. “It’s getting complicated because a lot of businesses are saying that they already have business so they don’t see the need to sponsor Pride,” he said. “So what I always tell everyone, and I make it public, is that it’s bigger than that. It’s bigger than your pocket. It’s for the community, it’s visibility, it’s education and that doesn’t have a price. That’s what we’re finding.”

“Being a cultural festival we’ve tried to get funding from the government, federal, state, but we haven’t been able to,” Sanchez added. “They do help with promotion with bringing media and things to cover the festival, but actually paying the bills, that’s the hard part. Right now we’re trying to figure out how it’s going to work. We feel that there’s nothing yet, no resolution about that. It could be a turning point for the festival, because if you don’t have the funding for it, then how do you produce it?”

As for this year, President Sanchez is optimistic.

“Now Pride is bringing more than 20,000 people for the week,” he said. “You see that movement. It’s growth and there is business for everyone. Automatically it activates the economy. Bars are full, restaurants are full.” He reports that the Vallarta Pride revelers are overwhelmingly Mexican nationals, a figure he estimates is around 70%.

“The parade is always a highlight,” he said. “I like the block party, definitely with the themes that the different businesses have. The drag derby is a highlight. It’s very fun. I’m looking forward to the farmer’s fair with the activity that we’ll have. But everything is a highlight that week. The screenings for the film festival. This is the first time we’ll have a public concert with Lorena Herrera. It’s a concert for the entire community, not just the LGBT community. It’s going to be a Teatro Vallarta. That is a huge highlight.”

Related Story:
How gay is PV

Diversity. Ten different flags and what each one represents