Adan Carano Dances With the Waves 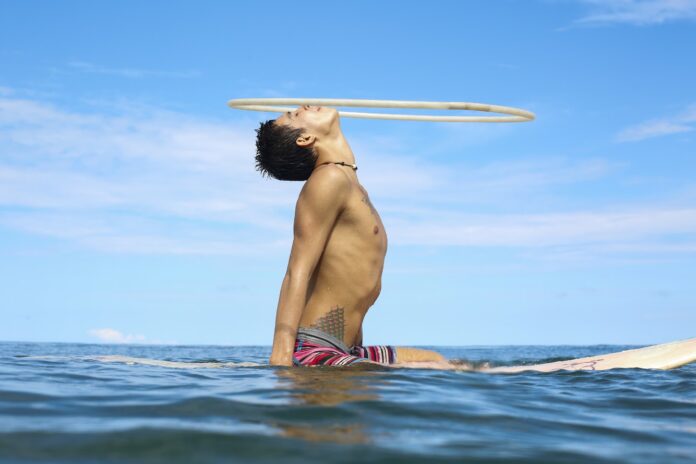 Adan Carano is a brilliant artist who combines his love of the Hula-Hoop with his nimble surfing skills, bringing together elements which have become vital in Adan’s life.

In the LGBTQ + community, almost everyone has a coming out story. Those stories are littered with good and bad consequences, have brought families together or torn them apart. But one constant in all of those stories is that when a person decides to come out, that step changes everything in their life.

And that’s what happened to Adan. His sexual orientation forced him to move away from his home state, Aguascalientes, and his family. They were not ready to understand it, nor he to explain it.

At 16, he decided to leave his home and environment – a place that left him depressed and without a clear picture of his own identity.

And so, he set out on his own. As he traveled, he met a group of friends who were street performers, traveling to different cities in Mexico, and they invited him to join them. On the road across the Mexican Republic, he went to places like Huasteca Potosina, Leon, Queretaro and Toluca, he honed his skills as a street artist, performing amazing hula hoop routines that left people amazed.

But as he arrived in Sayulita, Nayarit, it was a destination that —without knowing it— would change his life.  His friends left without warning, leaving him without anything – not even a cellphone. With few options, he decided to camp on the beach for a month. As time passed he found a safe place working in a hostel, and a new friend began to teach him how to surf.

“My surfing adventure began at La Lancha Beach,” he explained. “This is a paradise near Sayulita, and is a great area for beginner surfers.”

Sayulita was just the beginning of his relationship with surfing. After mastering the waves with his board he decided to be on the move again. His next stop was the old continent: Galicia, in the north of Spain, where, through volunteer work, he was able to arrive and settle as he continued practicing Surf, in another country, with another climate and other waves.

“But I didn’t find that the climate allowed me to surf as I wanted,” he said. “So I grabbed my backpack and headed to the Canary Islands. There, in Tenerife, I found the balance between Mexican and rocky European beaches.”

The beaches of Tenerife provided the perfect combination for him to practice circus art and extreme sport. At first, Adan did not believe that he would be able to perform such madness, but, when he jumped on the surfboard to make the first turn with the Hula Hoop, he did it on the first try, marrying his two passions.

“The surf community has received me quite well,” Adan told O&APV. “Despite the fact surf is a sport mostly practiced by heterosexual men, I have never had any qualms showing myself as I am, feeling proud to be part of the LGBTQ+ community, sharing interests for sports.”

Adan believes there are three levels in life: Mind, Body, and Spirit.

“Surfing makes you combine and coordinate the three, to reach balance,” he said. “For me, the most important thing is passion – that’s what you have to have to move every day.

As Adan came out, his previous experiences made him shy away from the “gay scene”, and he wasn’t much into partying.

“But that helped me to find myself,” he explained. “Being rejected after I came out of the closet did not help me feel confident or comfortable to be near the gay scene. But I wanted to add that the experience and surfing have served as motivation for me to work  on self-acceptance.”

Now, he’s ready and enjoying our LGBTQ + community. He has plans to open a Queer Community of Surfers in Puerto Vallarta in the future! So exciting for those who enjoy extreme sports.

He firmly believes the gay community need more activities, beside partying. Cultural, artistic and sportive activities are things he’d like to participate more in.

“And I’m always looking to learn something new,” he said. “I am not happy unless I’m pushing myself to new boundaries.”

With that in mind, he’s starting to perform with other artists, and friends who have invited him to collaborate. He’s constantly looking for ways to learn new techniques in surfing and Hula Hooping.”

What’s in the future?  Adan has his goals set high.

“You set your goals high and why not,” he remarked. “Even Circo Del Sol could be in my future.”

If you’d like to see Adan performing his Hula Hooping, you can find him as part of the Karma Chameleon Show, on Wednesdays and Sundays, 9 p.m. at ACT2PV.

And if you take a walk around Sayulita, you’ll surely see his pink Hula Hoop dancing in the waves, holding hands with his partner, Mr. Surf.