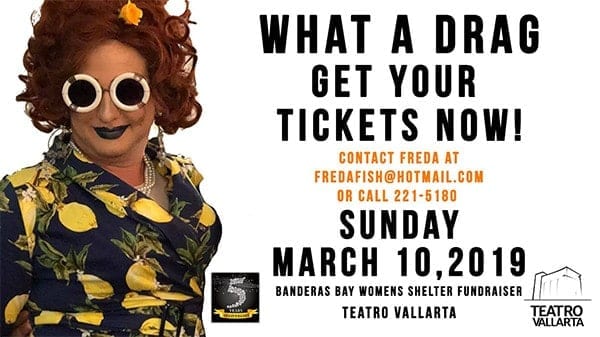 Next Sunday, March 10th at 8:00 pm, Teatro Vallarta will host the 5th annual drag competition for straight men ‘What A Drag‘ to raise money and awareness for victims of domestic violence.

What started out in 2015 as a fun way to raise money and awareness for victims of domestic violence in the Banderas Bay area has become the hottest ticket in town – and one of the most anticipated yearly events in Puerto Vallarta. And if you’ve ever attended, you know why. Every year a few brave men trade in their boots for high heels and get up on stage (in drag) to brazenly entertain the audience with their hilarious antics – all to raise money for the Banderas Bay Women’s Shelter.

Each contestant has a Fairy Drag Mother to help them with costuming, makeup and talent, and ‘Miss What a Drag’ is selected by the audience. Watching these brave straight men bravely and brazenly vie for the ‘Miss What A Drag’ crown in a competition that includes talent – from hilarious skits to singing, dancing and lip-synching – to evening wear and racy Q & A rounds, is an experience you won’t soon forget.

To date, ‘What A Drag!’ has sold-out every year, and has raised over $2.4 million pesos to support the shelter, which offers women and children who are victims of domestic violence with an immediate, temporary and safe living environment. This year, event organizers have set the goal at $1,000,000 pesos, and you can help them reach it by becoming a sponsor, purchasing tickets, or both!

Teatro Vallarta is located in El Centro at Uruguay 184, just south of Ley’s grocery store on the main street as you enter downtown. For more information, visit the What a Drag Vallarta Facebook event page.

After three consecutive sell-outs, ‘What A Drag’ expands to Teatro Vallarta

OAPV Staff - July 7, 2020 0
When's the last time you got a compliment the moment you took your pants off? That magical feeling is the inspiration behind the Bunch...