This Week at Incanto: the incredible ‘Lady Zen’ debuts 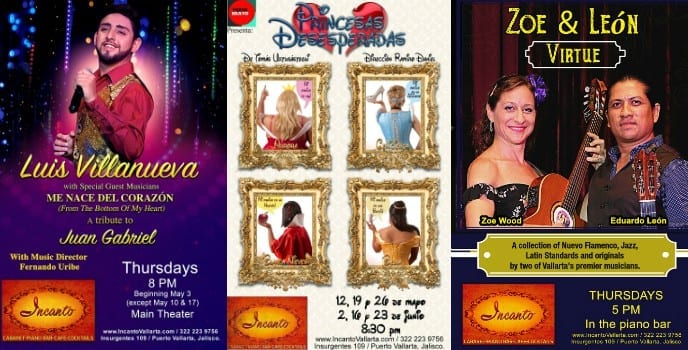 ‘Lady Zen’ is an internationally known award-winning lyric poet and singer/storyteller. Currently living in San Miguel de Allende, she will present ‘Always Something There to Remind Me’ a tribute to the 80’s music that influenced and inspired her. Fridays in June, 8pm.

‘Princesas Desesperadas’ is the hilarious stage comedy about four Disney Princesses who get together fifteen years after their “happily ever after.” Princesses has sold out most of the previous four seasons of performances and contains adult language. Presented in Spanish, June 2, 16, 23 at 8:30pm. Early reservations are recommended.

Paco Ojeda’s ‘Dinner and a Movie’ series is on Tuesdays at 7pm. Paco introduces the films, which are shown on a giant screen in the air-conditioned theater. A special dinner menu is also available. See Incanto’s website.

Ballet Folklórico Tradiciones features adults and children presenting a variety of traditional dances from various states in Mexico with narration in English and Spanish. They will perform the exciting ‘Dance of the Machetes’ from Nayarit, and as the handsome Charros and beautiful ladies of Jalisco, among others. June 9, 8pm.

Greater Tuna starring Ron Spencer and Tracy Parks plays on most Wednesdays at 8pm. The hilarious story of small-town Texas with twenty-two eccentric characters played by two actors and forty-two costume changes. This is the first time the show has been presented during the summer season.

In the piano bar –

Trivia Madness! is on Wednesdays from 2-4pm. No cover

Open Mic is on Thursdays at 7:30pm. Sing, dance, play an instrument. The stage is yours. Arrive early to sign up.

‘The Joan Houston Show’ with Bob Bruneau at the piano features ‘The American Songbook’ Fridays at 5pm. Classic music, lots of laughs!

Salsa dancing/lessons is on Wednesdays & Sundays at 8pm on the upper terrace. All are welcome.

Yuvia Niebla is a local singer/guitarist. Her interpretive, heartfelt style is quite popular with audiences. Sundays, 5pm. 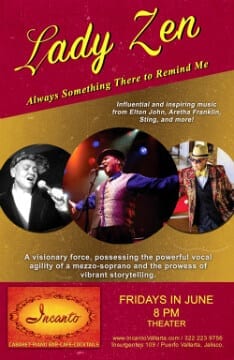