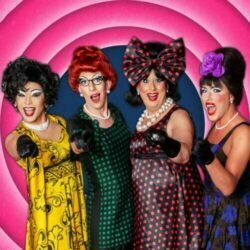 Hilarious drag queens, The Kinsey Sicks, has returned to Puerto Vallarta with their new season, The Dragapella Show!, performing in The Palm Cabaret on Tuesdays, Thursdays and Saturdays.

Enjoy their great show and delight yourself with these saucy girls and their repertoire of favorite songs performed masterfully and with a touch of irreverence and humor, which is their hallmark.

O&APV has been infected by their madness and we were able to talk with them about their love for Puerto Vallarta (because it is important for them to come back here), and what they think of the drag art that is presented in the world today. Our conversation is seasoned with their brilliant sense of humor. Find out who is the best Drag Queen for the Kinsey Sicks in this fun talk! Enjoy!

Internationally known for their original and fun way of addressing current issues in society and politics and turning them into a music and comedy party, the group of The Kinsey Sicks will be performing in Puerto Vallarta and believe us you will regret not seeing them.

With more than 25 years of running, they have performed in theaters, concert halls, cabarets, and comedy festivals in the US and around the world. His record includes an Off Broadway show, a Las Vegas residency, two feature films, three concert DVDs, ten albums, and performances in the US, Canada, Mexico, Europe and Australia. They are characterized by their salty and exaggerated humor perfectly complemented by their extraordinary voices a Cappella and their alter egos in drag.

Their 25th anniversary show reprises their critically acclaimed show, Things You Shouldn’t Say!, named by Forbes magazine as one of the “Best Shows of 2017. Race to buy your tickets to enjoy their wonderful voices, huge wigs and quirky comedy style.

They will be doing season from January 1 to February 12 at The Palm Cabaret and Bar, Tuesdays and Saturdays 6.30 p.m. and Thursdays 8 p.m.