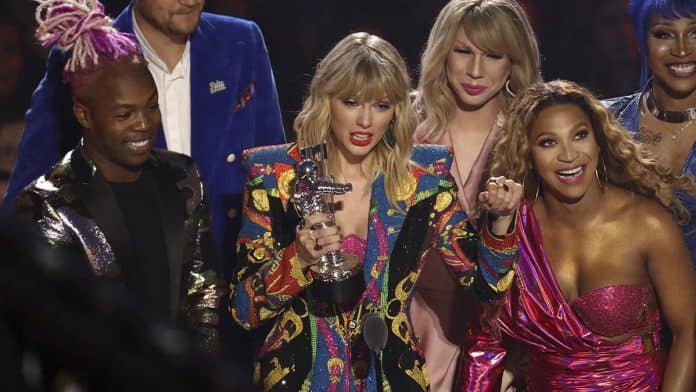 Swift opened her show last night at 2019 MTV Video Music Awards with two singles from her new album Lover: the technicolor trailer park-themed You Need To Calm Down, and then brought it back to her roots by bringing out her guitar to sing the title track of her new album “Lover”.

The words “Equality Act” were shown over the 29-year-old pop star’s performance, a reference to her support of the Equality Act legislation that would prevent discrimination based on sexual orientation and gender identity.

“…We deserve equal rights under the law.”

After winning the top prize, the 29-year-old pop star and a number of cast members from the video appeared onstage to accept the honor. Applauding her fans for voting for her, the pop star, who sings “Cause shade never made anybody less gay” in her song, said in her speech, “You voting for this video means you want a world where we’re all treated equally, regardless of who we love and how we identify. … We deserve equal rights under the law.”

CONGRATS @taylorswift13 on her SECOND time winning VIDEO OF THE YEAR #VMAs pic.twitter.com/l8TOibbTTr

Last week, Swift released parts of her personal diary, along with her latest album, Lover, detailing her emotional fallout from West running onto the stage at the 2009 VMAs and pulling the microphone from Swift’s hand to say the award should have gone to Beyoncé instead. at 2019 MTV Video Music Awards, Swift also took home the trophy for the “Video for Good” category.