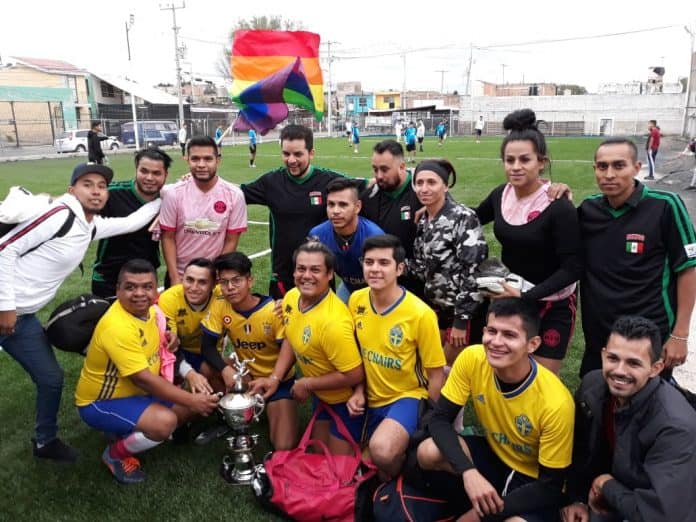 In Mexico, it is difficult to find openly LGBT+ athletes because of the fear of retaliation in their careers; even though Mexico is one of the countries that has more incursion of athletes and by being a place where the openness regarding homosexuality is growing, when it comes to sports it is still a taboo.

In order to seek the recognition of sexually diverse sports and fight for the human rights of the LGBT community in Puerto Vallarta, the Puntis Puerto Vallarta Gay Sports Club was created.

“Initially we had a space where we practiced volleyball on a multipurpose field in the main square of ‘Pitillal’ but we had to dispute the space with other soccer players… heterosexual players.” Explained Luis Cárdenas, team goalie.

The lack of spaces to practice sports in Mexico, forced the LGBT+ athletes to play games against heterosexual athletes to decide who was going to use the field, they were constantly beating the heterosexual team and that’s how the idea of ​​creating an LGBT+ soccer team emerged.

“We got together and in 2016, we put the team into a fast football league that consisted of 5 players and we named it Puntis in honor of Coapinole who was a great support for the team and also nicknamed us as Puntis” Explained the goalkeeper of the Gay Sports Club of Soccer Puntis Puerto Vallarta.

The team’s growth was rapid and in 2017 (one year later) they were already participating in its first national tournament. “Our first national was DIDESEX by its acronym: Diversidad, Deporte y Sexualidad in Mexico City where we were the only 100% gay team among the 23 participating teams. We faced several champions and in the semifinal and we won against a heterosexual team. The final was against a team of Mexico made up of heterosexual players and that is how we obtained the second place in our first participation representing Puerto Vallarta.” Commented Luis Cardenas with great emotion.

The most important LGBT+ sports event in the world, the Gay Games had place in Paris, France and that is where thousands of athletes from at least 70 countries congregate. The Gay Games were created in 1982 in San Francisco with the intention of eliminating any type of stereotype regarding the LGBT+ community, preventing discrimination and promoting acceptance, since many of the athletes who participate come from countries where homosexuality is illegal. “One of the members of our team called Armando del Toro was part of the selected team of Mexican soccer players to represent our country at the Gay Games in Paris” said the proud goalie of Puntis.

The response has been very positive, both members of civil society and the authorities have provided their support in order to continue representing Puerto Vallarta and Mexico. “Our coach Antonio de Alba and the Puerto Vallarta authorities have supported us to be able to raise the team, even businessmen have also given us their support” expressed Luis.

Luis Cárdenas also mentioned that they are in search of talents with notions of the sport and with the desire to join a soccer team such as Puntis Puerto Vallarta Gay Sports Club “The team was re-assembled in Puerto Vallarta but we have had player losses so we currently have a completely open call for members of the LGBT+ community. ” said Luis, who has been on the team with which he has competed in places like Colima and Guadalajara and will soon participate again in the LGBT Cup in Mexico City on November 16 and 17.

Puerto Vallarta Women Are Calling For a Feminist March

Randy Rodriguez - February 17, 2020 0
In celebration of Valentine's day, a lineup of local and international musicians performed a free concert at the Los Arcos del Malecón amphitheater in...

Miss Conception Shares Her Top Five Things to Do in Puerto...

La ChaChaLaca, a new bar at the former StreetBar location, is...