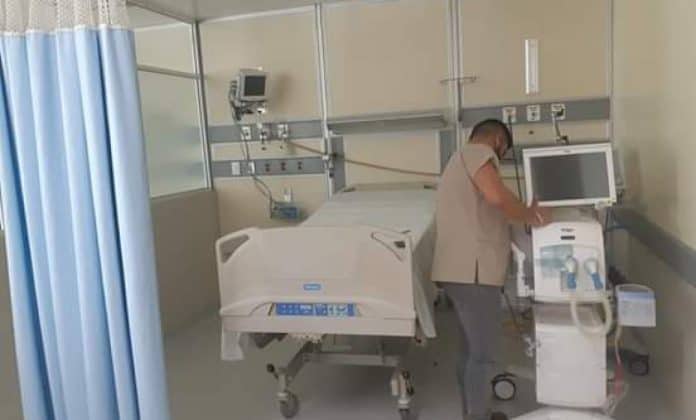 Puerto Vallarta, Jalisco.- The Regional Hospital of Puerto Vallarta has an area enabled for the exclusive care of patients with symptoms or contagion of Covid-19, which is independently accessible to the rest of the hospital, according to the director of the Eighth Sanitary Region based in this city, Armando Pérez Oliva.

The area was expressly enabled to isolate patients and it has 5 beds with 5 automatic fans to aid in the breathing mechanism of patients, since one of the conditions of this disease is difficulty breathing.

“The day before yesterday we received four fans with their monitors one of them is a walking one, beside the fans that already existed in the hospital. The new high technology fans were installed and were already working and in perfect condition,” said Pérez Oliva, hoping that there would be no one who needed it.

“We have to be prepared for this contingency,” he added and highlighted that there is already a person who died from this disease in Mexico. The director of the Eighth Sanitary Region said that he does not want cases to occur in this state area.

“We are preparing ourselves with the protocols that are already implemented with an express area, in which patients will arrive at the hospital through a separate area that is conditioned and marked in order to reach and not put at risk any medical personnel, or other personnel who work in the hospital.

Likewise, he said that the area is equipped so that the personnel who attend it have a space to carry out the disinfection and cleaning under established protocols.

In this space works an internist doctor, an emergency doctor, nurses and a special person who is taking the laboratory tests to send them for analysis in the capital city.

“As the cases are presented, it is the staff who will be on the lookout and contact directly and take care of the patients,” he said.

Getting the tests ready

Once the governor of the state Enrique Alfaro Ramírez announced that starting this Thursday a period of immediate detection of cases of Covid-19 will begin, rapid tests will be arriving at the Eighth Sanitary Region, “We ignore how many of them are arriving” said Pérez Oliva.

“We have not received yet the supplies to the health jurisdiction, according to the information provided by the Governor, that rapid tests will begin, we are just waiting,” he said.

According to the information provided to Quadratin health officer in the region, material will be delivered daily, as distributors and suppliers are supplying the central warehouse, he explained.

Hector Betancourt is the Ambassador of Vallarta Pride 2018