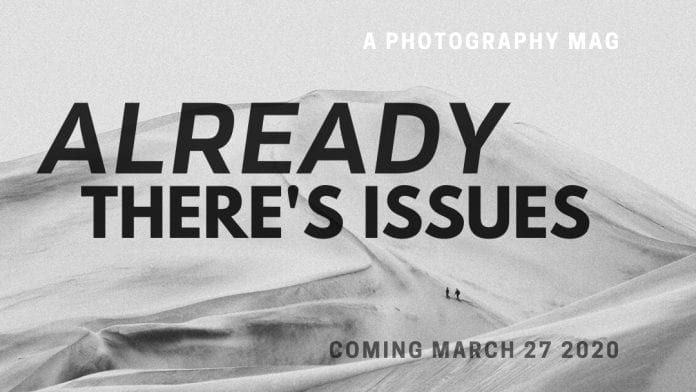 Already There’s Issues is a new LGBT Magazine produced in Puerto Vallarta and will be released on March 27 with a launch party being held at New Animal Gallery in 5 De Diciembre, it’s a collaborative magazine about queerness that celebrates the beauty in self-reflection, disobeying, and ownership over the definition of masculinity.

Gilbert Beltran, the creator of this premium magazine delves into the topic of masculinity and how gay men are pressured to either conform to the rules of masculinity or to take the more difficult path of defining masculinity for themselves. The one message you can take away from this photography book (which is full of nude all-gay models) is that masculinity is prismatic and there is no necessity for one person’s definition of masculinity to be another’s. This magazine was conceived and designed in Puerto Vallarta. It reflects the beauty of Mexico and the lifestyle we are afforded by living in this lush paradise. It was important to Beltran, who is Mexican from California, that this magazine be bi-lingual and shines a light on the beautiful Mexican lifestyle.

The cover of his first issue will feature Mama Tits, the drag performer who is originally from Seattle but now performs in Vallarta annually during peak seasons. “She’s a beacon of the Vallarta community who embodies the power of walking in their truth. Mama Tits is a talented performer who has no problem identifying with all sides of herself because it’s only when we are generous with ourselves that we can accept all of who we are and then we can finally enjoy the benefits of true self-acceptance, which in a judgmental community like the gay community, it can be hard.” said Beltran, founder and Editor of the magazine. “For many people, acceptability politics keep us down, oppressed, depressed and snuffs out our creativity and excitement for self-expression. I talk a lot about acceptability politics in the magazine and I’ll define what that is for you now: Acceptability Politics are the divisive rules that we employ against our own brethren in order to feel superior or special.” said. “Like for example, If you’re a masc top, you can’t cry at “The Notebook”, or if you’re a Drag Queen, you can’t be a political activist. It’s these gay-on-gay divisions that I think are the fallacy of our community. I am marching toward a world where a person is whatever combination of gender, interests, proclivities, and expressions they want to be…and that they will just be called their NAMES and not just a label like “m2f post-op” or “pass-around party bottom”. He said.

“Queer people don’t grow up as ourselves, we grow up playing a version of ourselves that sacrifices authenticity to minimize humiliation and prejudice. The massive task of our adult lives is to sort out which parts of ourselves are truly us and which parts we’ve created to protect ourselves.”

The inspiration for this magazine was in the stigmas and rules surrounding masculinity that are doing real, actual harm to men and the people that they hurt when they feel they are not living up to the masculine ideal. “For anyone who ever read the very popular book, The Velvet Rage by Alan Downs or if you’ve just looked around at gay men, validation and acceptance is a huge driving factor in our behaviors as a people group, there are always rules that we as men have to follow: We have to be traditionally strong, commercially successful and are expected to wield power over others while always saving face and never showing any signs of vulnerability. Through years of behavioral research, we can see clearly that those who adhere to these idealistic behaviors have quantifiable ramifications on their health and quality of life. This magazine takes a humble stab at presenting these topics in an aesthetically pleasing, sometimes sexy and thoughtfully created piece of print art.” he said.

When this magazine started, Beltran says that the goal he had in mind was to create a magazine about the Drag Queen scene in Vallarta. But when he began creating the magazine, he realized he has more to say about his struggle with defining masculinity for himself than he did on the topic of drag. “Thankfully, we have Mama Tits on the cover to share with us her perspective from the viewpoint of a busy, booked and blessed queen.” said.

The first issue is 200 pages of photography, including pages dedicated to talking about gender development and progress in this current time in our history. One of the essays in the magazine is called “Genderosity” “This essay is about the freedom you can find when you stop trying to force yourself into one of the predetermined molds of gender expectations. The weightlessness that comes with throwing away acceptability politics and just being the unique formula of a person that you are.” He explained. The magazine reflects his passion for portraits and at the same time, his particular taste and admiration for the ephemeral beauty of men. “I want to represent the gay people in Vallarta through beautiful photography. My passion is portraiture… I love taking pictures of gay men because I think the tenderness in men is really beautiful and the sensitivity of men is often dismissed as wrong or inappropriate but I embrace it. Actually, I’ve really grown to love it about myself. I wanted to take artists from Vallarta who feel the same way about the beauty of masculinity in all of its forms and put it in a book and also represent Vallarta in the process”. he said.

Furthermore, Already There’s Issues Magazine will also be a way to get acquainted with some of the local photography and modeling talent. “Every beautiful person in the magazine is properly credited so that you can reach out to them if you have projects or inquiries and there are tons of talented writers and photographers who have contributed to this project.” said Beltran. Now, Gilbert is on the verge of releasing this photobook at the end of March in concurrence with an event held at the New Animal Gallery in 5 De Diciembre. “The event will be an art-y social event where artists will be displaying their works, the magazine will be celebrated and we people will have the opportunity to network with other artists here in Vallarta while we drink wine and listen to the live trio play.” he said.

Ultimately, this project is about one thing: “Letting go of the rules which keep us pinned into forms that do not fit us just for the approval of other people, rules that are dividing us and is keeping us from realizing that there are all different combinations of the masculine and the feminine, and that isn’t hurting anybody! Femininity is just one other piece that makes up the whole of a happy, healthy man.” he said.

Already There’s Issues will be on sale from March 27 for 25 USD. Available in Mexico City, San Francisco, Los Angeles and stores around town also in www.theAlreadyMag.com able to ship anywhere in North America. This Weekend At The Palm Cabaret Cabaret & Bar

Same Sex Couples Looking to Adopt? It can be difficult in...