The registration of entrepreneur and activist Joel Cortés as candidate for Federal Deputy in Tijuana, Baja California makes him the first openly gay contender seeking to win a deputation in the upcoming elections in Mexico. 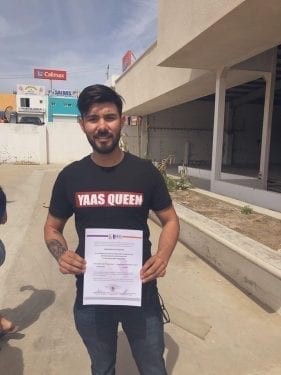 Cortés has worked as an activist against discrimination as well as those people living with HIV, so his legislative agenda will be based on promoting their rights, creating a Secretaryship of Diversity and working to recognize equal marriage in his State.

The candidate also spoke with us about his goals to benefit the community “We will seek to open the dialogue table between authorities and people from civil society to create an agenda and legislate the rights of transgender people in the State.”  affirmed decisively.

He also wanted to send a message to readers: “I ask you to join and support the agenda, it is so important that the work that we do reaches the Congress, regardless of whether I win or lose the elections we took a step forward that cannot be taken back. “Cortés requested.

We have nothing left but to invite the 113 million of Mexicans from different States that are entitled to vote on June 2nd to take a decision based on the political proposals that suits and benefits them the most.

‘So you think you can RISE’ a new talent contest to...